We gardeners know that healthy soil is crucial to the success of our gardens. But what does that mean, exactly? Healthy soil is ALIVE. One teaspoon of healthy soil contains billions of organisms: bacteria, fungi, protozoa and nematodes, which are the foundation of a predatory hierarchy called the SOIL FOODWEB. It is a delicate balance of organisms, which have evolved to cycle nutrients to plants. Each organism has a unique role to play. 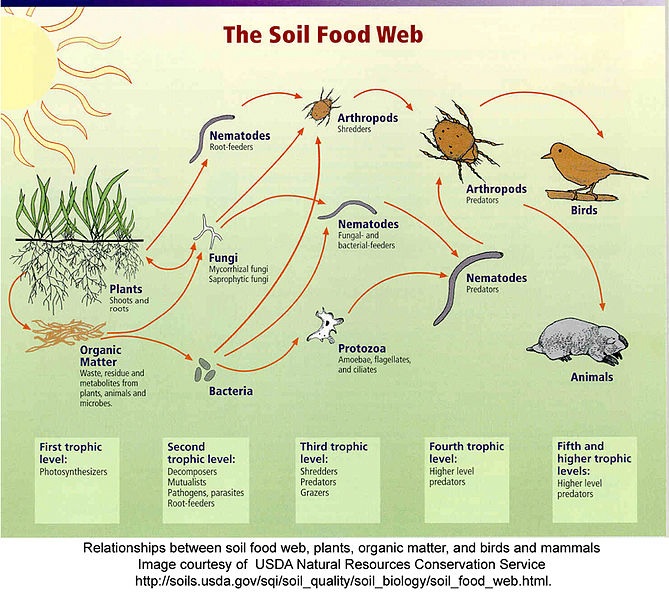 Bacteria – Soil bacteria break down organic matter and convert the minerals into nutrient proteins, which they lock up in their bodies. They also emit a slime, which binds small soil particles together, building structure.

Fungi – Soil fungi are the heavy-duty decomposers that break down hard woods and complex carbons. They convert minerals from the parent material into nutrient proteins, which they tie up until unlocked though predation. Most fungi grow long filaments called “hyphae”, which extend out into the soil and act as a sort of highway for shuttling nutrients back to the main fungal body. These hyphae bind soil particles together and improve structure.

Protozoa – These are the first organisms to unlock the nutrients and feed the plants. They eat the bacteria which has been decomposing and converting nutrients. They use what they need, and expel the rest in a plant useable form. As they move through the soil, they create space for air and water to percolate.

Nematodes – We all know about nematodes which feast on our plant roots, but did you know that most nematodes are good guys? Nematodes are microscopic round worms, which move through the soil feasting on fungi, bacteria, protozoa and each other. They use the nutrients they need and expel the excess as plant usable nutrients.

Then there are micro-arthropods, earthworms, and springtails, and so on up the chain. Each organism has a specific and crucial role to play in this chain.

These organisms are fragile and easily destroyed through modern garden practices. Tilling & digging destroys the delicate fungal hyphae. Chemical fertilizers, which are primarily salts, act upon the bacteria and protozoa the same way pouring salt on a slug does. Over time, our soils have become depleted and, quite literally, lifeless. The primary tools for bringing this life back into our soils are biologically active compost (such as vermicompost – compost processed by worms aka worm castings), mulch and compost teas/extracts. The consistent use of these tools rewards us with increased soil structure and fertility, increased disease and pest resistance and decreased water and fertilizer needs. Better yet, because you are putting these organisms into the soil, where nature intended them to live, they will establish themselves and continue to multiply long after the application. So instead of a garden which requires ever increasing inputs of fertilizers and biocides, we create a garden which requires fewer and fewer inputs and is truly self-perpetuating – which is the very definition ofsustainability.

Your Soil will Benefit from Compost Tea May 31st, 2013lindamckendry